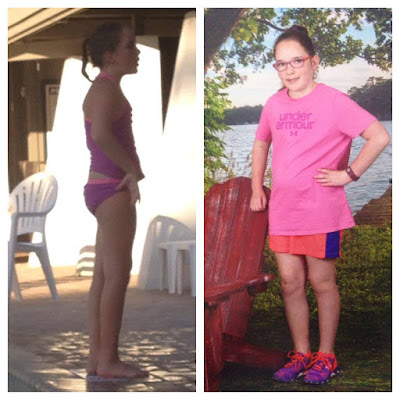 I was going through some things and I found the picture on the right from April. It struck me how different Ayden Jane looks now so made this. These pictures are only four months apart, but what a change in four months!!
Posted by Janet Gulley at 9:01 PM No comments:

Email ThisBlogThis!Share to TwitterShare to FacebookShare to Pinterest
Labels: picture

We are nearly done with the third week of third grade. It is going so fast! Glad to say Ayden Jane is doing GREAT. She has been working hard in math and is mastering the concept of multiplying. Lots of arrays, groups, number sentences, skip counting... She totally gets it. I do see trouble on the horizon as she does not memorize her facts well and needs to figure them out pretty much every time but I choose to enjoy the moment.

Her writing is and will likely always be her biggest challenge, but I can say it is already improving this year. That bar is set higher so she is digging deep and making it happen. I often still think she can't write it small enough, or she can't fit that in the box, or drawing out that multiplication array is too tough. Then she does it. On the flipside, she has gotten very comfortable dictating to me on homework when it's overwhelming. I love that because I pretty much hate spending time on homework.

Her teacher only has good things to say so hooray.

She did come home with a tradgedy today. Her star was moved because she was talking when she was not supposed to be... She lost some "dollars". It was hard for her to accept, but in a way it was a good thing for her to get through and realize the world did not end. As a side note, I don't really like the 'behavior' systems that take away points or money or whatever. So much easier to handle not earning things than it is to have to hand over things.

The hardest part of the star moving is that Ayden Jane feels it was a sort of injustice. She does not deny that she was talking when she was not supposed to be, but feels that other kids were talking when they were not supposed to be at other times and did not get in trouble. Oh dear child. It is a fact of life that sometimes people get away with doing wrong.... Life is not fair.... I can't fix that nor can you. We talked about how she can spend her time worrying about how other people are behaving and whether or not they are being "caught" ect, but that it is a waste of time and effort. The best thing she can do is take care of her own choices and be the best Ayden Jane she can. Such big kid lessons.

She cried it out. The interesting thing is she sort of knew he just needed to be miserable about it. I thought it might be the topic for the remainder of the night. I wondered if she would balk at going to school this morning. I asked if she wanted me to fix it. She said she knew I couldn't fix it and after about 10 minutes or so mourning she bounced back, never mentioned it again and went on with her night. I so hope she has a great day today and learns that sometimes we all mess up, get caught, pay the price and move on...
Posted by Janet Gulley at 8:45 AM No comments:

Janet Gulley
South Carolina
I am wife to Gary, an amazing man by the way, and mom to 4 awesome kids which bless our lives richly. This blog is mostly about our 4th child who came with some added challenges which took some time to figure out and come to terms with. Ayden Jane has Prader Willi Syndrome. This is a life long genetic condition which challenges our faith and our family daily. I am happy to say, however, that God is good. I can even say from experience and from the heart, that God was good when things seemed impossible. Now I look at, squeeze, chase, discipline and love Ayden Jane and the rest of our crazy crew and I know that God is good all the time. Ayden Jane has been a most unexpected blessing and the lessons learned and people met because of her continue to bless our family.