This fall is racing by. Ayden Jane is doing great in school and she is participating in several after school activities.  She is one happy, busy little first grader.

Mondays she has school, of course, and then swim team for an hour. It is a great little group of kids and the coach does about 15 - 20 minutes of a 'land' work out with the kids first and then they swim for about 45 minutes. Ayden Jane is the youngest and she is doing great.

Tuesdays she still has hippotherapy (therapeutic horse back riding). She has been going to the barn since she was 18 months old. She works hard on the horse doing lots of strengthening exercises and really loves when she gets to jog.

Wednesday she has soccer practice for her little rec soccer team. She does her best and is improving. She has a long way to go before you could call her a soccer player, but she runs around and has fun so it's all good.

Thursday she has her other day of swim team.

Add in there a couple of dog walks or bike rides or trampoline time or playgrounds or beach time and we manage to keep her pretty active.  She is of the mindset that the busier the better so off we go.

Instilling the idea of daily exercise has been a great benefit to Ayden Jane. Since she is a routine kid she does not feel that any day is complete unless she has had some exercise! What I notice is that daily exercise keeps her energy level high and her brain sharp.

I know, it's just like so many other things for her dealing with PWS. It is actually true for all of us that we would feel better, think better, sleep better and be happier if we committed to daily exercise.  It's just that our typical bodies can cheat on that and still get by.... No pass for Ayden Jane, but she doesn't mind. She thinks it's wonderful that we take long walks together or bike rides or that we  'have' to get exercise. She uses this need to get time with me, her Dad or her siblings - but of course we don't mind.

Posted by Janet Gulley at 8:44 AM No comments:

The first quarter of first grade is coming to a close. Not sure how that is possible, but it does bring on time for parent/teacher conferences. I was a little nervous for Ayden Jane's; not sure why. Just as background, yes, Ayden Jane does have an IEP, but it is solely for the purpose of receiving OT. She does not have any other support and is a typical kiddo in first grade with a few quirks that deals with a lot of medical crap with style.

The numbers stacked up like this. Her standardized testing which is a 'MAP" score done on computer placed her as average and low average with percentiles in the 40's. Of course I would rather not see 'low average' written on things, but since the word average is on there I am good with it!! Yep, not one area was labeled low or below average.  Woot!

Next up was the running record. AJ"s school uses the Fountas and Pinnell running records for reading as a way to track reading level. Ayden Jane finished last spring as a level C. She is now sitting at a level E. I'll take it!

Teacher feels that Ayden Jane 'gets' the math they are doing. She just is sure to position herself next to AJ during teacher directed activities because AJ will decide she knows what she is doing and try to work ahead. The problem comes in when Ayden Jane takes off and is wrong she is one tough kid to reel back in!

Her teacher is concerned about the quality of Ayden Jane's handwriting because she feels the second grade teachers will not accept it and will melt AJ down over it. I told her that I am not too worried about that because she is writing letters now quickly and the quality of her sentences is excellent. She is able to come up with good, grammatically correct sentences. She can spell phonetically and come quite close to the correct spellings. She is spacing between the words all the way through the sentence and it is all a fairly smooth process. I asked her to just keep doing what she is doing because I see huge improvements. I just really think that if we can keep the ability to put thoughts on paper flowing, we can clean up the quality of the handwriting in time.

Mrs. C says that Ayden Jane is always happy, never a behavior problem, works hard and listens intently. Nope, can't ask for any more than that.

The only other thing of note she added is that when she works one on one with Ayden Jane, that is when she sees just how much Ayden Jane is picking up in school and how smart she is. I just love that Mrs. C sees the smart little brain in there even when her ability to express what she knows is compromised.
Posted by Janet Gulley at 6:21 PM No comments:

No. That is not a reference to Frozen. As Ayden Jane turned seven this week we had so much to celebrate and be thankful for. We did that! There are so many ways that Ayden Jane is blowing PWS out of the water and making it seem like just some little thing she deals with. Yep, kicked some butt at swim team, reading like a champ, can trade wits with a teenager, manages to be thoroughly happy without sugar in her diet, fearless in her approach to life... I could go on.

Just when you start to be excited about these things, PWS manages to sneak up on you. Well, it snuck up on me, not so much Ayden Jane. Saturday as I watched her soccer game, PWS just glared at me. Her team played a team of girls all her age that train together and are prepping for club soccer. They are sweat kids, good friends and several are in her school. They are the group of girls that would likely be Ayden Jane's good friends ... IF she had all her of chromosome 15 intact.

Instead, Ayden Jane wandered around a bit lost. Honestly, she was super tired from the awesome birthday week. It was her first game so she was still 'taking it all in' as she does during the first of most anything. She was more concerned about drinking and going to the bathroom than playing. She was obviously not in sinc with the rest of her team, or with anyone else for that matter.

Now I need to take a lesson from Ayden Jane. She was happy. She was not worried about much of anything, she was just enjoying a pretty day on a soccer field and doing what she could do and not worrying about she couldn't. I don't know why I let it bother me when she lags behind upon occasion because it doesn't bother her. Generally, she kicks it into gear in her own time and it all comes together.

Somehow, I need to figure out how let go of the things that she is just not going to be great at, even if she wants to be and be thankful for the things she does do well and the incredible can do spirit she has. I guess that sounds pretty obvious and like it shouldn't be too hard. It's just that it sneaks up on me. I get angry that her body is uncooperative and takes away the ability to simply run and play with ease. I begin to go down that dangerous path in my head of thinking about what she would be like if she had all of her DNA. I begin to allow bitterness for what she cannot do and the struggles she faces creep in when I should focus on how awesome she is and all the things she CAN do.
Posted by Janet Gulley at 12:12 PM No comments:

Ayden Jane was properly spoiled for her birthday. Last weekend, the prebirthday activities began with Kayla and Allie coming in from Clemson. They rode bikes to the beach, swam at the pool and played whatever Ayden Jane wanted for the entire day on Saturday. (which actually started more like Friday night) Ayden Jane is one lucky little 7 year old. They even showered her with presents!

Next up was the actual birthday. She asked to take chocolate dipped strawberries as a treat for her friends. It worked out great! Some of the kids looked at them like they were foreign objects from some crazy planet, but in the end almost everyone loved them. A few even said it was cool that they were on Ayden Jane's 'magic diet'.  (see the book Gordy and the Magic Diet) After school she had soccer practice and then Grandma came to visit and brought presents. Yay! She loved it.

For the grand finally, we took Ayden Jane to ride her first roller coaster. To say that she loved it is quite the understatement! She loved all things fast, high and spinning. The more wild, crazy and dangerous, the bigger the smile and greater the joy.

Sorry the pictures are not the greatest, but lighting and the speed at which they were going were a challenge. 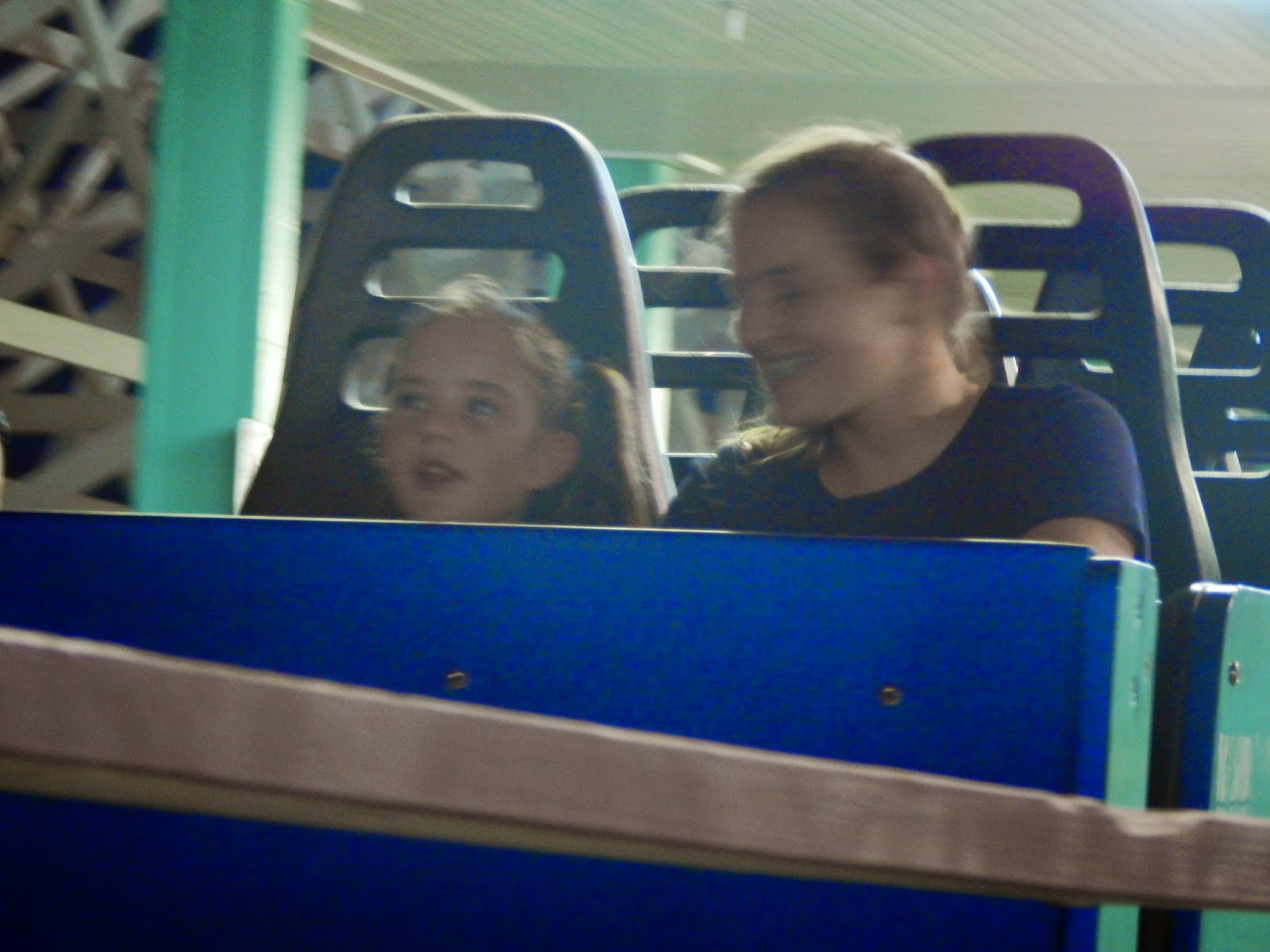 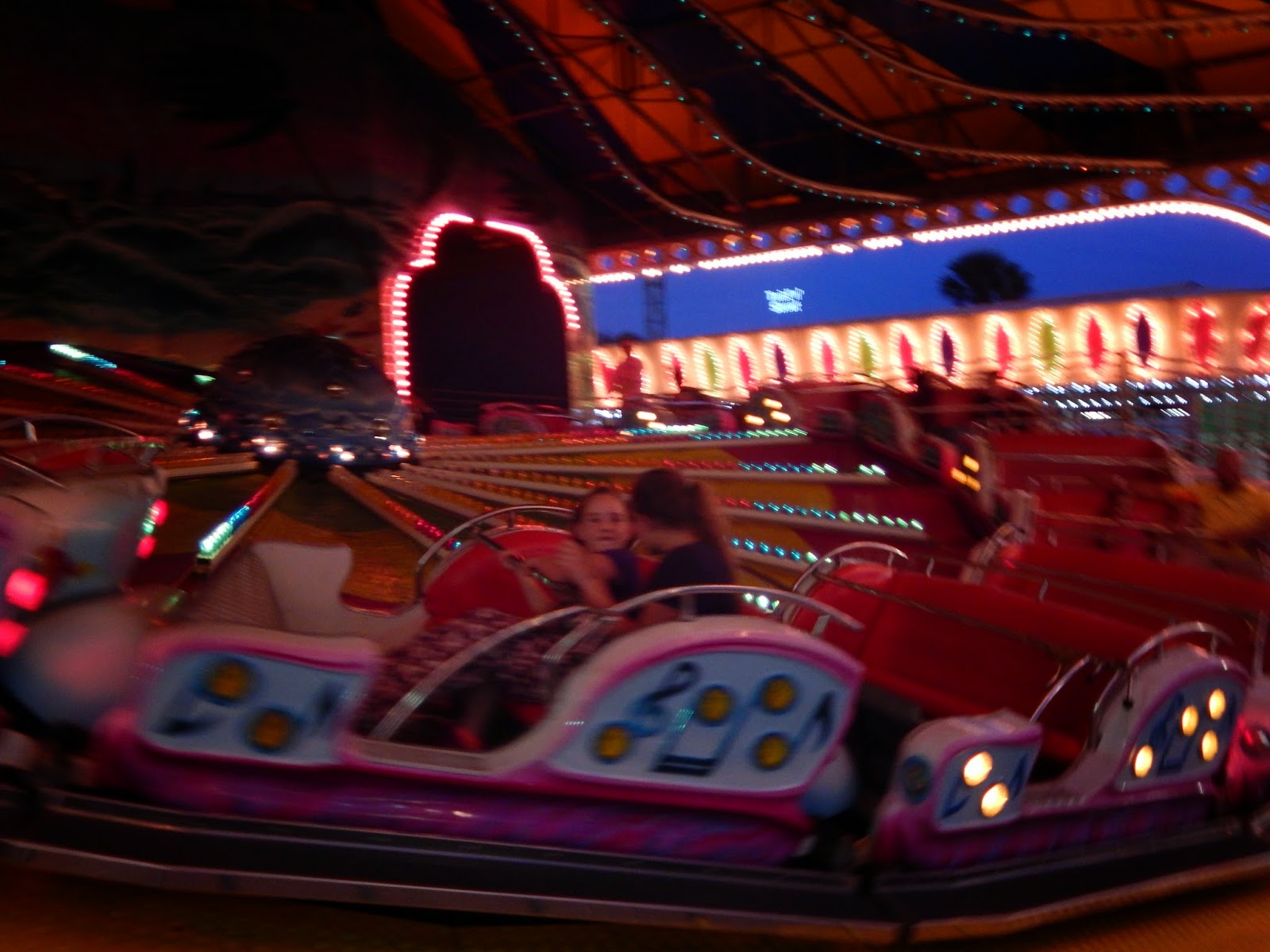 Posted by Janet Gulley at 6:01 PM No comments:

Janet Gulley
South Carolina
I am wife to Gary, an amazing man by the way, and mom to 4 awesome kids which bless our lives richly. This blog is mostly about our 4th child who came with some added challenges which took some time to figure out and come to terms with. Ayden Jane has Prader Willi Syndrome. This is a life long genetic condition which challenges our faith and our family daily. I am happy to say, however, that God is good. I can even say from experience and from the heart, that God was good when things seemed impossible. Now I look at, squeeze, chase, discipline and love Ayden Jane and the rest of our crazy crew and I know that God is good all the time. Ayden Jane has been a most unexpected blessing and the lessons learned and people met because of her continue to bless our family.